A Favorite for Voice 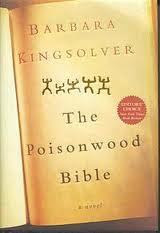 This superb book, by Barbara Kingsolver (1998), is an oldie, but a goodie, and, in my opinion, is the supreme novel highlighting voice.  The book is about Baptist Preacher Nathan Price who moves his wife and four daughters from Georgia to the Belgian Congo, circa post WWII, in order to try to convert the Congolese to Christianity. The book consists of alternating first-person narratives from the perspectives of all five women -- one of the few instances in literary history that a prominent male character is left voiceless.

Rumor has it that Kingsolver spent almost two decades working on this book and wrote it five times over -- once in the voice of each of the female characters.  For each chapter, she picked the version with the character's voice she liked best and compiled the book into the stunning work that it is.

Orleanna is the mother who is torn between obeying her husband and seeing to the health and welfare of her four daughters.  Rachel is the first born daughter, and, at fifteen is characteristically adolescent and materialistic. Leah is the idealistic twin of Adah who is developmentally delayed, and Ruth May, is the baby of the family -- an innocent five year old. The five female characters speak of their frustration and struggle as they attempt to assimilate into the world of the Congo, amid the poverty and political turmoil of the period, even as they challenge and reassess Nathan, and all that he represents with his hierarchical views about gender, race, class and religion.

A must read!  Enjoy this treasure.
Posted by Debra at 9:39 AM