Coins on top or bottom? 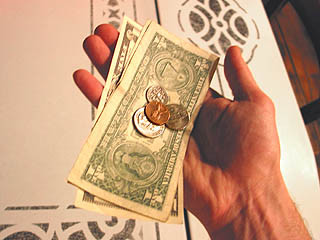 What's wrong with this picture?  Isn't it obvious?  The cashier has given you back your change with the coins on top method.  Now the coins are going to slide all over the place, maybe even land on the floor.  And, if  you're lucky, same cashier will top this whole debacle off with the receipt, which you'll stash in your mouth for safekeeping while you deal with the rolling coins and eventually get a chance to tuck the all-important bills into your wallet.  Grrrrrrr. 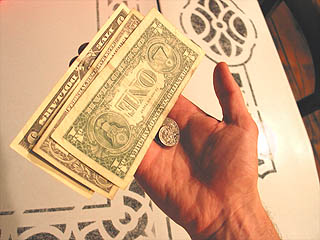 ﻿Now, take a look at this picture.  Doesn't your blood pressure go down?  How calming and reasonable to have the cashier give you back your change with the coins on bottom method.  You slip the bills into your wallet, put the coins in your pocket or change purse, and all is well.  Perhaps, the cashier has even nicely counted your change back to you -- coins first -- and you are certain you've gotten back the correct amount.  Maybe you even feel so good about this transaction that you take your handful of coins and deposit them in the cashier's tip jar!
It's obvious which method I prefer.  Lately, the coins-on-top thing has become a pet peeve of mine.  But, I've heard various defenses for the coins on top method -- mainly, that the cash register shows the change as dollars first, coins second, and so cashiers grab the change that is shown and put it into your hand . . . also as it is shown, with coins on top.  They don't count back to you because they don't know how or were trained not to.  I've also heard that cashiers use the coins on top method because they don't want to touch germy hands and so put the bills (sanitary as they are) into your hand first, then drop the coins on top to avoid actual skin-to-skin contact.
We won't even begin to talk about putting the receipt on top of everything because this issue is complicated enough.  But, please do tell which you prefer.  Are you a coins on top or a coins on bottom kind of customer?  And, if you're a cashier, what is your method of change delivery?
Posted by Debra at 5:11 PM 2 comments

2012 Humanist of the Year Award 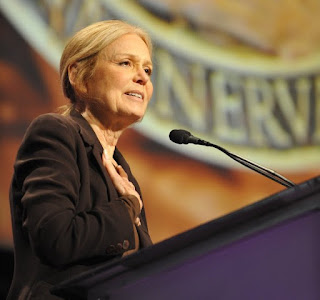 "Equal pay, and I mean for equal work, would put $200 billion more into the economy every year ... Those women are not going to put that money into a Cayman Island bank account, they are going to spend that money, and that is going to create jobs." ~ Gloria Steinem
The Humanist of the Year award was established in 1953 to recognize a person of national or international reputation who, through the application of humanist values, has made a significant contribution to the improvement of the human condition. Selection of the awardee is based on research derived from biographical data, writings, studies, and contributions to humanity.  The 2012 recipient of The Humanist of the Year award is . . . none other than the fantastic Gloria Steinem.

You know how it is.  You read a book and put it down.  You continue to think about that book for a while (that’s how you know it was a good one).  You continue to think about that book for more than a while, for months even – and that’s how you know it was a great one.
I read Haruki Murakami’s 1Q84 this summer and am still thinking about it.  It is a crazy book – one of those that I would read, then put down and shake my head over.  What was happening?  What sort of book was this?  What sort of writer was this?
After finishing the looonnnggg read, I was sad that the strange, twisting Murakami-conceived literary adventure was over. I’m still sad that it’s over.  Murakami’s works are considered humorous and surreal and deal with modern culture.  I particularly enjoyed his views about modern Japanese culture in 1Q84.
The Guardian praised Murakami as "among the world's greatest living novelists" for his works and achievements.  ,Murakami’s fiction and non-fiction have garnered critical acclaim and numerous awards, including the Jerusalem Prize, Franz Kafka Prize, Tanizaki Prize, World Fantasy Award for Best Novel, New York Times 10 Best Books of the Year, Yomiuri Prize for Literature in Fiction.  He has spent time in the U.S., teaching at Princeton and writing several books while in residence here.
In sum, go read him.  And then, let me know what you think.
Posted by Debra at 7:39 AM 0 comments 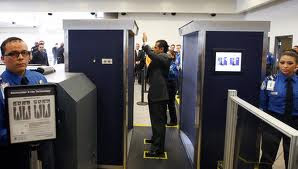 WAIT!
Don’t do it.  Do not walk through the body scanner.  You do not have to.  They cannot make you.  And it may be dangerous for your health to do so.
Irritating compliance with ridiculous rules aside, this last step in the security process is downright wrong.
There are two kinds of body scanners in airports across the country – those that use x-ray technology and those that use millimeter wave technology (and, according to a recent New York Times article, millimeter wave machines DO emit radiation, albeit less radiation than the x-ray scanners).  For decades, health care practitioners have cautioned against exposure to unnecessary x-rays.  You even get a little lead-apron to wear when you have to have dental x-rays.  So, why is it now okay to expose thousands of travelers to unnecessary radiation all for the sake of “security?”  Even if those levels are labeled “low” and “safe,” why risk it?
European, American and Australian studies are mixed about the safety of body scanners.  Plainly, they are just too new to have accurate long-term data about their safety.  In fact, TSA has just recently admitted that the x-ray scanners are probably not safe and are pulling them from many airports in favor of the millimeter scanners (the ones with the “low” radiation).  But, why is low radiation considered safe?  What about people who travel frequently and are exposed often to this “safe” radiation?  Logic would have it that even the millimeter scanners may not be the best for people’s health.
Recently, I flew out of O’Hare and faced the usual ordeal of Security Theater.  Instead of encountering the ire of security staff when I opted out of going through the scanner (they then have to do a pat down instead), I actually got sympathy from the TSA workers.  The first person I had to deal with told me, “I don’t blame you.  I won’t go through those things either.”  The second person, the woman who was assigned to do my pat down said, “Have you done this before?”  When I nodded, she said.  “Yeah, I bypass all the time myself.”
So, go ahead and exert your right not to be scanned.  Opt for the pat down, even if it takes a little longer and isn’t exactly the most pleasant experience in the world.  If entire lines of passengers refuse to be corralled through the scanner, perhaps TSA will come up with saner – and safer – methods of ensuring security.
Considering how few terrorists are caught, despite Security Theater, isn’t it unconscionable to expose thousands of travelers to health-damaging radiation – “just in case?”
Posted by Debra at 6:20 PM 2 comments

What's the latest and greatest new fad in Japan?  The Bagel Head.  Apparently, people voluntarily want to look as if they've had bagels surgically implanted into their foreheads.  Why? Good question.  I can't see the aesthetic, ironic or creative draw to the procedure.  It is shocking, though, and a little weird -- and that's probably the whole point.
Bagel heads get that way by having about 14 ounces of saline injected under the skin of their foreheads.  The saline creates a round, domed mass.  To get the bagel look (versus, say, the snowball look), the practitioner pushes his or her thumb deeply into the saline mound to cause an indentation.  The indentation -- in fact, the whole bagel look -- lasts for under a day.  Then, the saline is absorbed into the body and the person goes back to looking like a boring old human again.
So, do tell.  Is this a look you've secretly been admiring?  ﻿Or does the thought make you want to skip breakfast?
Posted by Debra at 5:21 PM 3 comments